A.K.A.: IT ISN'T JUST A MAN'S GAME! - Female Group Show at Nuart Gallery

Often aliases, like art, indicate no gender. Gender after all has never been a big issue when it comes to art. But what happens when art gets selected for display? Or when it comes to street art?

Often illegal and interlaced with high-risk activities to produce it, street art still conveys a strong stereotypical male image. And even the most popular street artist, whose identity is still mysterious, has driven home the narrative that street art requires an all-boys club education.

Some artists will agree, some others will not. In some countries certainly being a street artist is a tough game, we all know this. However, when it comes to Western countries, what really matters is recognition.

It is 2017, certainly it took some time, but that time has now come: street art, like every form of art, is no longer a man’s game!

With A.K.A: IT ISN’T JUST A MAN’S GAME! We want to scratch the surface, rebalance the ‘inequalities’ and celebrate the work of some of the great women artists we had the pleasure to work with over the years. We hope you will see them as Artist and not just as ‘women artist’, and love their work as much as we do.

First artist to be announced: Alice Pasquini’s Art (IT) 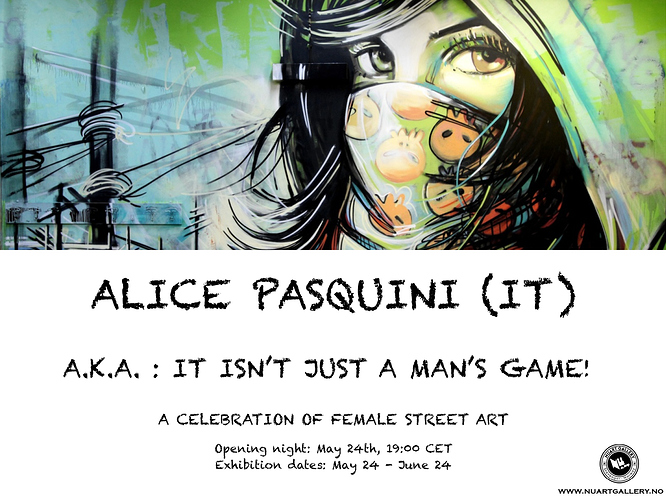 One of the Nuart Aberdeen participating artists, Alice is a multimedia artist from Rome whose affectionate street art explores the brighter side of human relationships. Pasquini’s art revolves around the topics of femininity, encompassing murals, paintings, and illustrations which tell stories about various acts of kindness and love.

Street artist, painter, illustrator and set designer, Alice has developed a multitude of artistic expressions, from narrative-based, pastel-toned murals to her most recent series of installations created from found materials.

Her work focuses on positive values “I’m interested in representing human feelings and exploring different points of view”.
Because of the nature of her work, she was commissioned to work for organisations such as Red Cross and Greenpeace. In addition, Alice has completed projects with international clients, such as Canon, Nike, Range Rover, Toyota, and Microsoft, illustrated the graphic novel Vertigine (Rizzoli, 2011). Alice and her work have been featured in New York Times International, The Wall Street Journal, l’Espresso, Panorama, Vanity, and many other international publications.

Sydney, New York, Barcelona, Oslo, Moscow, Paris, Copenhagen, Marrakech, Berlin, Saigon, London, and Rome are some of the cities where her work can be found.

Come check out her work and give Alice a warm welcome to the Nuart Gallery!!! 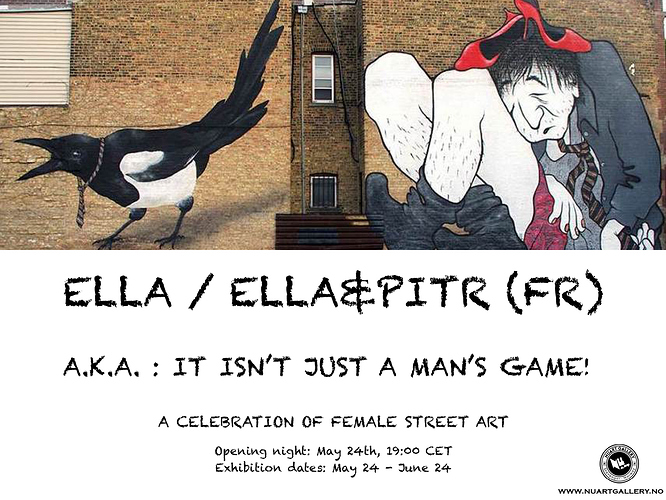 Internationally acclaimed French couple Ella & Pitr specialise in creating large-scale murals of fairytale-like characters. Their gigantic characters can be found sprawled across rooftops, runways, houses, shipping containers and even entire fields; each defined by an innate playfulness and a unique style appropriated from influences as diverse as comics and children’s books to graffiti. As well as producing their trademark gigantic murals the world over, Ella & Pitr have exhibited at international art galleries at home and abroad.

In 2015, as part of Nuart Festival’s 15th Anniversary celebrations, they created the world’s largest outdoor mural in Klepp, Rogaland. Visible from planes flying into and out of Stavanger’s Sola airport, it has quickly become a new international landmark.

"When this duo met, Pitr, serious and of dour demeanor, unrepentant tagger and graffiti artist, had been clandestinely hitting the city walls for close to a decade, and wondering where to take things next. One dark and stormy autumnal night, this solitary individual would pack his rucksack with cans and markers, alone, one last time.

On that very same night, Ella, a bright and energetic young artist looking for ways to engage a larger audience with her character-driven works, had taken to the streets with bucket and paste and an armful of rolled-up paste-ups. Ella & Pitr were, of course, aware of each other’s work, Saint-Étienne being a relatively small town, but they had yet to meet.
That evening, as Pitr was just finishing a mid-sized throw-up with a cheeky ultra-wide tag down an unlit alley, a dog started to bark wildly. Quickly packing his rucksack, pulling his hood over his baseball cap, he quickly moved down the street with a well practiced head-down march. Approaching the corner, he broke into a jog.
Several yards down an adjacent street, Ella, dressed in a red and white Polka dot raincoat (with matching hat), had also heard barking, from what she imagined to be a very large and menacing dog. She quickly finished pasting up her work, a hand - coloured illustration of a birthday cake she was going to post for a friend as a surprise. She plonked the brush into the bucket, scooped up the remaining paste-ups, pulled her collar up and her hat down, and sprinted home. Nearing the corner, she instinctively looked over her shoulder, as Pitr, on the other side of the wall, did likewise. Bam! The two crashed into each other at almighty speed, polka dots and paste meeting hoodie and cans in a tangle of arms and legs as they came crashing to the floor together amongst a pile of ruined paste-ups. At that moment, the Prussian-blue clouds parted to reveal a beautiful full moon, beams reflecting incandescently off the glistening street. Laying on their backs, wet and dazed, they looked at each other, then in unison at the moon. “Hey,” said Pitr. “Hi,” said Ella. The rest is history." — Martyn Reed 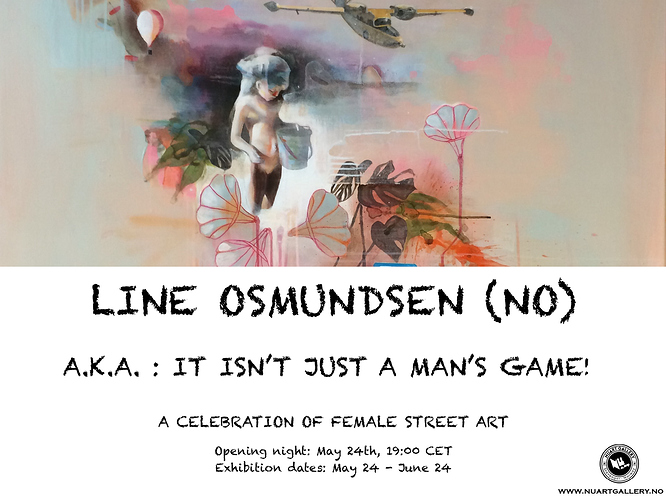 Line is a Norwegian artist, ex clubber turned painter, best known for her use of sharp geometric forms and female characters. She had her artistic debut in 2014, at Nuart Gallery when she presented herself and her art with an exhibition titled “Beautiful Crazy”. The show raised huge amount of interest in her work which has now become very popular.
Line’s characters draw on a large and complex accumulation of influences from both urban club culture and the more sedate country lifestyle they embraced when the music ended and motherhood began. We feel echoes of wild weekends in the sharply rendered, vibrantly coloured shapes that jag at the backdrop of coloured washes. Like sharp memories dissipating and washing at the shore of their past.
A work full of love, life and lust. A Seductive, independent trip with Mother Gaia and her sisters that channels everyone from Egon Schiele to David Choe, Modernism to Graffiti and beyond!